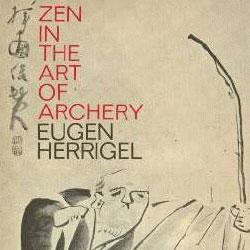 Before most of you were born, the German philosopher, Eugen Herrigel, wrote a thoughtful and entertaining book called “Zen in the Art of Archery.” It is small, but it is big: a Google search of “Zen in the Art of Archery” turns up 1,360,000 results! Mr. Herrigel’s story, widely read both then (1948) and now, tells of his personal experiences in Japan seeking knowledge about the nature of Zen Buddhism. His six-year search was undertaken through archery lessons from a Japanese Zen master. What, I hear you say, has archery got to do with Zen? What is Zen anyway? I don’t know the answers, but I’ll try to wend my way around them. (I took archery lessons this spring from Kyle, and when I mentioned that I had read the book — now several times — he asked me to write a review. I am happy to do so.)

To begin with, Zen in the Buddhist religion is something like learning through meditation rather than through books. It emphasizes understanding Buddhism and oneself through instruction from a skilled Zen teacher. Something like pupil and mentor, I suppose. It developed in China thousands of years ago and spread to other Asian countries. Well, it is more than this of course, but I cannot enlighten you much further. It’s a mystery that you might be able to solve on your own.

Invited to teach at the University of Tokyo, Mr. Herrigel seeks also to find Zen. Achieving a state of Zen, we learn, can be done through many activities, for example flower arranging or swordsmanship or archery. Choosing archery, he is rebuffed at first as a hopeless European incapable of sustaining the right spiritual attitude and rigors of training. But he eventually finds a Zen teacher and begins — being introduced to a large, strong Japanese bow made of bamboo. The technical details, as readers will know, involved (I quote) “grasping the bow, nocking the arrow, raising the bow, drawing and remaining at the point of highest tension, loosing the shot.” The master directed Mr. Herrigel (the archer) to forget about the bulls-eye. Archery is presented as an art or a ritual, sort of becoming one with your bow and arrow. Early training mostly involved breathing correctly. Week after week, and month after month. And trying to relax the arm and shoulder muscles — with a kind of effortless strength.

The next lessons were “loosing” the arrow, or the release. It looked so simple that it reminded the archer of child’s play. However, it was not so easy to do smoothly – he mustn’t open the hand holding the bowstring on purpose. There followed weeks and months of fruitless practice. The master said that the archer was too willful, that he did not let go of himself. After some years, the archer thought that he might finally be on the edge of learning how Zen could come into play. And, at this point, the reader is only half way through the book. And the archer himself is finally introduced to a target! Previously he had shot at a bale of hay a few yards away.

It’s humdrum to say that practice makes perfect, (or better, that practice makes less imperfect) but practice is also a Zen-like affair. The more the archer practiced under the watchful eye of the master, the more his actions became automatic, the less he thought about shooting an arrow or, for that matter, thinking about anything. His mind was blank; thinking at all, especially about himself, interfered with his shooting. Zen, or perhaps just sustained training under a skilled coach, pointed toward an effortless spiritual attitude that must be experienced, so it is hard to put in writing.

Six years passed with ups and downs, mostly dealing with the release. Increasingly, the archer shot arrows that felt right because his form was correct and his release was unexpected. He learned that archery was as much ceremony as sport. The master and his pupil had a rocky and somewhat mystical relationship with each other. As a neophyte archer this spring, I was surprised that the book said so little about aiming. The archer did gradually improve, however, and he eventually passed a critical test.

So, I conclude with a question: Does Kyle teach with Zen in mind? There are actually many similarities. For example, his constant attention to form and his lesson on breathing. And especially, the release: Kyle emphasizes that it should come as a surprise. The string should just slip off your fingertips in a quiet swish – propelling the arrow — without your knowing about it. That’s pretty Zen-like to me.

And Kyle’s Amherst Archery Academy T-shirts say, “Find Your Center.” That’s pure Zen, whether you learn to hit the center consistently or not. But, it feels nice to release an arrow smoothly into the bulls-eye where Kyle often places a balloon. Pop!

(This review was first published in 2013. Thank you, Arthur!)