Sattvic force is the force of inner strength. Resilience. Mental toughness, on the inside. These ways of being form the core of everything we do at Sattva.

Whether you register for a general group session, talk one-on-one with a coach about the best equipment for you, schedule a birthday party, or attend a custom program, we always aim to help you find your center. Our coaches have a true love of teaching, exploring, and sharing archery.

Sattva offers year-round training clinics and certification programs to support the development of coaches and athletes. From our Hello Yellow clinics on bow-tuning with Olympian Jake Kaminski, studying archery form with National Head Coach KiSik Lee, to mental performance clinics, and program reviews for camp and school programs. We want you to grow.

With up to 30-meters of distance, moveable targets, and a dedicated strength and fitness area, our indoor range is an open, inviting, and well-lit year-round archery solution.

Experience the Sattva difference. Your strongest self, built through archery. Our programs are structured to accommodate you, whether you have a regular schedule or a crazy unpredictable schedule.

We are the only pro shop in the region specializing in target archery. Don’t see it in our shop? We’ll special order it for you. Or, make an appointment for an equipment fitting.

Ask Sattva Center for Archery Training Owner, Kyle Bissell, about how Sattva began and he’ll get a little wistful as he swells with pride and explains that it all began with a young boy. This young boy was a lot like every other child, but with unexpected brain trauma. He had suffered a major concussion, forcing this once active child to lie still while he healed. Stillness is never easy for active kids though; he needed an activity that would stretch his brain and body in new, safe ways. So Kyle started teaching him archery. Below is an excerpt from an article his mother wrote about the experience:

In the spring, after not being allowed to sign up for sports for the third season in a row, Peter became quite depressed. He had been amazing for the seven months, but his ability to be positive and patient was waning. I worried about him because it was clearly going to take more time than we had ever imagined to recover. How was he going to make it? 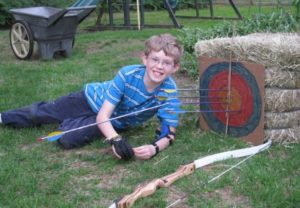 Peter and his “Robinhood” shot!

Peter had read and loved the Ranger’s Apprentice series by John Flanagan. The rangers in this series use a bow as their main weapon and Peter had a romanticized vision of this. I asked him if he would like to take archery lessons and got a resounding yes. We approached Kyle about the lessons and they started meeting every week.

Peter took to archery. He loved it and did well. During Peter’s fourth lesson he shot a Robin Hood, which was an amazing once in a lifetime shot. It boosted him even further. Peter was happy again, he was calm and had purpose. I credit Kyle’s wonderful teaching and the soothing, healing qualities of archery for this. They gave Peter what he needed to continue his long recovery.

Archery encourages a quiet mind, inner strength and relaxation. It builds focus and promotes a positive feeling of self-worth. Through Kyles’s fantastic guidance Peter found himself. It was a different self than he had known before. Peter’s confidence grew and his outlook brightened. Archery was a turning point in Peter’s recovery and brought him through the next seventeen months.

Being an archer became Peter’s identity. Being good at it became Peter’s goal. It gave him something to love, to work towards, to be. He was no longer Peter with a concussion, Peter who still can’t play soccer, Peter who can’t go to the movies or use the computer. He was Peter the archer and that was something to be proud of.

Thanks to Kyle’s experience with Peter along with his own love for the sport, it didn’t take long for Sattva (originally founded as Amherst Archery Academy) to become an official business with growth beyond Kyle’s dreams. It turns out that practicing archery in a mindful, welcoming, nurturing way is extremely rewarding for both coaches and students.

From there, Kyle started offering retail to his students who – of course – needed the best equipment! He trained up some new coaches, and here we are today.

Kyle, as owner, head coach, and a Level IV USA Archery Coach, is an exceptional instructor. He is available for private instruction, bow tuning, and equipment consultations.

Thank you to Peter and his mom for sharing their story with us. You can read the whole story, and see more pictures of Peter at her blog, The Shy Gardner.

Classes for Beginner and Intermediate Youths and Adults