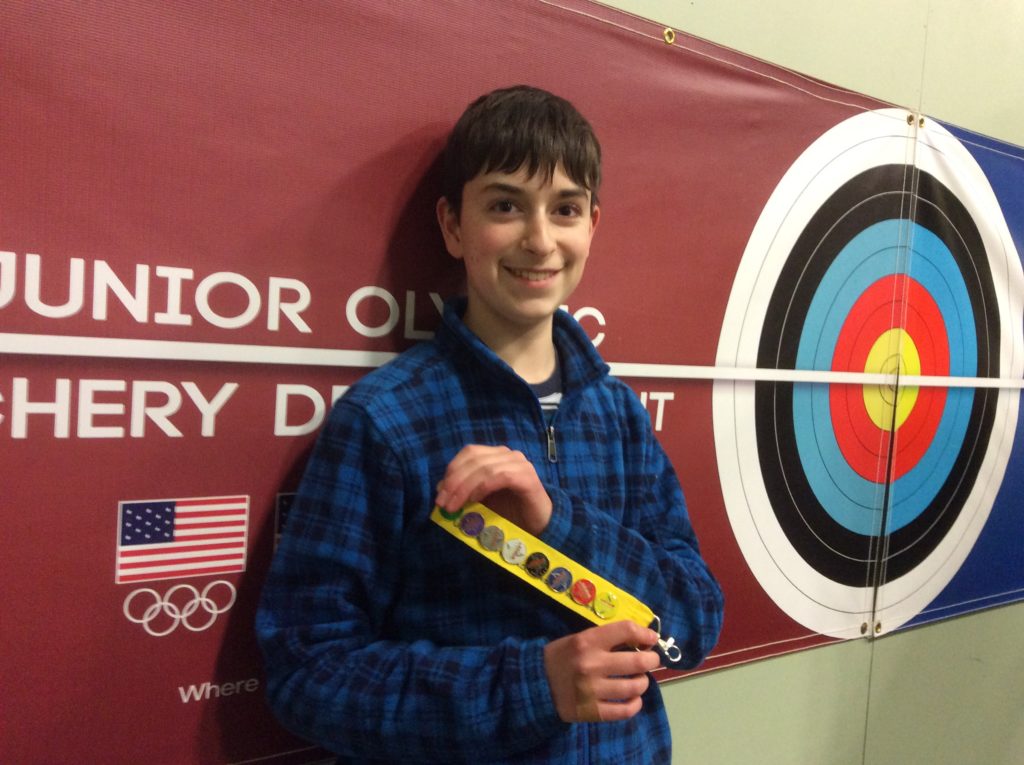 I’ll be writing a full report on how Nationals went. Until then, I don’t want another day to go by without acknowledging Sammy and his accomplishments during Nationals this year. Here is the story:

Sammy has been with Amherst Archery Academy from just about day one of AAA (Six years). I have photos of him shooting on our line, outdoors, at Bramble Hill Farm, with the square targets on the ground Rather than up on stands. Sammy was with AAA long before AAA had a JOAD, a trailer, t-shirts or any ILF bows and Carbon arrows.

Sammy has been a member of the AAA JOAD since we started that program 3 or 4 years ago and easily cruised through many Outdoor and Indoor pins for Olympic Recurve…until a year ago. The last Pin before the bronze, silver and gold Olympian Pins is the yellow pin. Sammy persisted for nearly a year to achieve this Indoor yellow pin.

Sammy had also never been to a “real” tournament before choosing to attend Indoor Nationals, 2017. Here is where the story gets great. Sammy goes to Nationals. Sammy plays his mental program plan well. That is, he successfully manages anxiety and adrenaline levels while maintaining a focus on process rather than outcome. Sammy shows no dip in performance from any added pressure from being at a massive event. Sammy shoots a 9.2 average arrow score for 60 arrows. Sammy achieves this score on equipment that costs far, far less than people with scores similar to his. Sammy shoots his highest 30 arrow round ever and achieves his yellow pin. Sammy currently holds 5th place Nationally for his age group. With his total score and portions the US still needing to report their scores I imagine he will hold top 15 or so by the official end of Nationals.

So. Here is to Sammy. If you see him around, Please, shake his hand…or fist bump….or whatever kids are doing these days. Congratulations, Sammy. It has been a pleasure coaching such a dedicated, steady and persistent archer. I look forward to your bronze pin now!