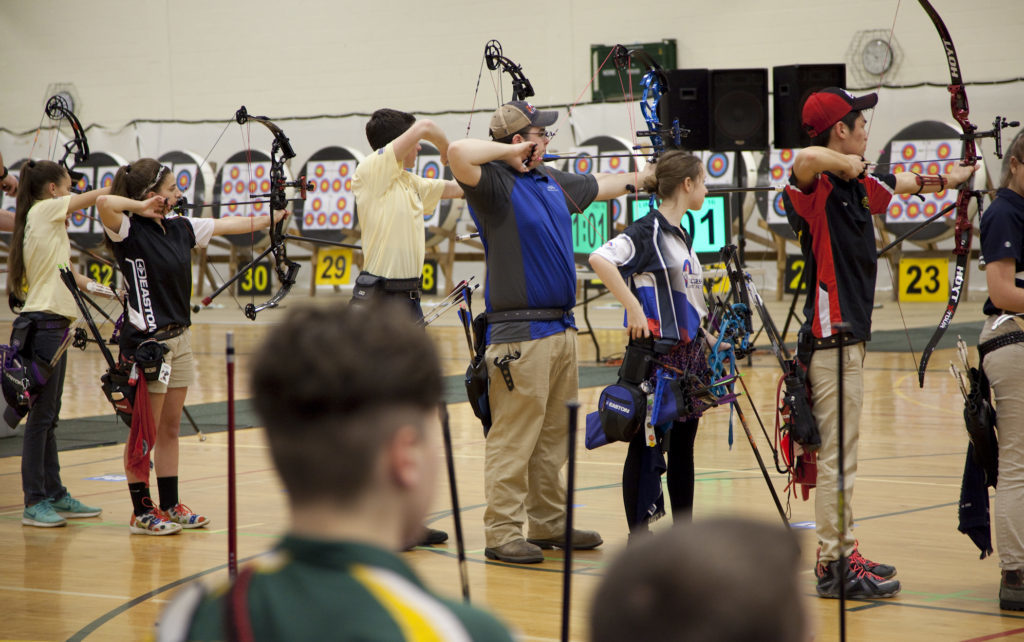 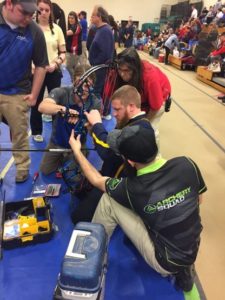 Daniel recently joined AAA. In fact, this was the first tournament I have been able to see him shoot in. While there were very specific quantitative goals we were hoping to achieve at Indoor Nationals this year, the primary goals were process-based and also focused on mental management.

Friday, during JOAD Nationals, Daniel had big success with the process-based goals and mental management goals, but his scores were lower than usual due to an ever mounting pattern of arrows hitting low and left. Saturday’s shooting proved to be similar: scores were lower than normal due to arrows landing lower left. Despite this, Daniel showed great resilience and determination to pull through – taking each arrow on as a new arrow. We thought the lower left arrows were due to him canting the bow ( an issue we solved since Indoor Nationals). Sunday comes around: After seeing the first three practice arrows land in far from desirable places (I think one was a blue…he usually shoots 9s and 10s) I catch Daniel’s eye and ask him to bring his bow to me for inspection.

It took me all of about 1 second to see that the arrow rest was broken. He has a blade style rest on his bow and the left prong was significantly bent…downward. Obviously this would create arrows landing low and left. My heart soared with excitement that the problem was identified.

Plan A) I bent the rest back to position and tested its strength to see if it would hold an arrow. I thought it would and was hoping it would because we did not have another rest that was “wide” size for his arrows. In the same stroke of time his line was called up to shoot the first scoring end. He tried shooting three arrows with it: no good. The arrow rest was cooked.

Plan B1): Find a spare arrow rest that will work “well enough” to get him back in “hello yellow”; get the new rest installed on the bow and then tune the bow (rest elevation and sight elevation) until he finds center again.

Plan B2): Call a mechanical. Daniel went back up to the line next time his line was called and, after the horn blew once, he raised his hand to inform the judge of a mechanical problem. This action allowed Daniel (and crew) as much time as we needed to fix the bow. He would have 15 minutes to make up how ever many arrows he didn’t get to shoot during the time we were fixing his bow.

I began working the network of coaches at the tournament to see who might have the arrow rest we need while Daniel’s father double checked their box of spare parts….only narrower blade rests could be found. A narrow rest means that his arrow might fall off the rest during the draw process, an annoyance at best, and it also means the arrow point sits at a higher elevation in relation to the D-Loop on the string. The sight would be off completely and practice rounds were over.

Myself, Judge Lucy Tabit, Coach John Fleury (and others) from Pelkey’s Archery, Coach Dan Bolduc from AIM Archery, Michael Roney worked rapidly and carefully to: 1) find an arrow rest that would function for the tournament, 2) install the new arrow rest, 3) adjust the elevation of the new arrow rest to align properly with the D-Loop, 4) spot arrows for Daniel as he sighted in his bow with all the adjustments made. Huge thank you to everyone who assisted in helping get archer athlete Daniel Roney back to the shooting line. We worked together well, there was great communication and, as Lucy Tabit stated, “Everyone helping out like that…that is the way archery should be. That was great”. Lucy, I completely agree.

In the end, Daniel ended up only missing two ends (six arrows) and he easily made up those six arrows in the 15 minutes (with everyone else watching. Judges, other Coaches, parents and spectators came up to me throughout the process as well as after with comments such as, “How is (Daniel) doing? He looks like he is handling this so well.” Now I’m sure it raised his stress levels beyond optimal levels – but he never let that show in how he interacted with other people, in how he performed or in his overall disposition. And, since our biggest goals had to do with mental management – I could not be more pleased with how Daniel Roney responded in this situation.

Daniel showed resilience. He showed patience. He focused on process rather than circumstances and outcome. His highest scores of the weekend came on the heels of a barrage of low left arrows and a broken bow that would rattle anyones mental game. Daniel stayed composed and steady even in the face of missing arrows off his target during the process of re-sighting his bow. Next time you are in a situation where your self-image is challenged, where adversity starts knocking on your door at the most inopportune time, remember the story of Daniel. And Daniel, remember the skills you demonstrated that weekend – keep those skills in your quiver. And…lets carry a few extra wide rests with us next time. I already ordered a few.